Peter Sagan: No hands on deck at Flanders

No, that is not an X-gamer who lost his way. The no-handed wheelie was performed by Peter Sagan, a 23-year-old Slovak who rides for Cannondale. His evolving English is almost as charming as his bike-handling, but no one would give a flip about either if Sagan wasn't a phenom of a road racer.He wouldn't have the largest repertoire of victory salutes -- which have included Forest Gump, Usain Bolt and The Incredible Hulk  -- if he didn't win so many races. 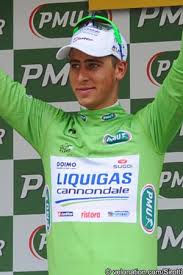 Sagan's special gift has become beating the best at their specialty. He bested Fabian Cancellara in a one-kilometer breakaway from the leading group in the first stage of the Tour de France last year. He beat uphill sprint specialists Phillipe Gilbert, Joaquin Rodriguez and Alejandro Valverde. He won five of seven stages of the Tour of California. OK, so he can't climb with mountain men like Alberto Contador or Chris Froome.

But the guy's a bike rider, particularly tough in the tough elements. He won the frigid Ghent-Wevelgem last Sunday, then took the sprint in the first stage of the Three Days of Panne. Both are considered warm-ups, so to speak, for the next two weekends of Classics. So, Cancellara and the rest of the strong men will be looking over their shoulders this weekend at the Tour of Flanders. He looks like a goofy kid and sounds like a goofy kid. But he's got the killer instinct on the bike. If he's with them in the lead group, he'll out kick them, then out-wheelie them across the line.

Watch out for him at Flanders.
Posted by Unknown at 2:09 PM