GO! makes a foray into the crowded field of fall half-marathons 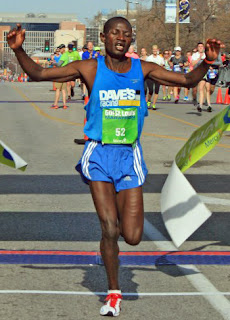 A crowded field got a little more jammed when GO! St. Louis announced the addition of a half-marathon to its Halloween races, set for October 13. The event also will include a 5K, 10K and fun run and has been dubbed the The Great GO! St. Louis Halloween Race.

The fall running scene has changed dramatically from three years ago, when area distance runners chose between the Lewis & Clark marathon and half in September/October and the St. Louis Track Club’s half, scheduled for the first Sunday in November.

At that time ,Lewis & Clark's organizers, Fleet Feet St. Louis, joined forces with Rock n Roll to bring the popular series here, dissolving an event that was held in St. Charles and staging the bigger event in downtown St. Louis. In one fell swoop, the number of runners competing in fall halves jumped from about 7,000 to more than 18,000.

Two years ago, Big River partnered with the city of St. Charles to launch the MO Cowbell half. Now, GO! joins the fun.

So, here’s the schedule of fall half-marathons:


But maybe GO! is onto something.

In the two weeks since GO! announced its fall half, about 750 people have registered. GO! also is limiting participation to 2,500.

Maybe they sense an opportunity.

Rock 'n' Roll launched with lots of fanfare, attracting 18,000 to it inaugural half-marathon in 2011. Last year, though, participation dropped to about 11,000.

The biggest difference between Rock 'n' Roll and the locals is that the former is a for-profit business. RnR is part of the Competitor Group, which publishes Velonews and Triathlon magazines and operates several web sites. Competitor also stages 31 Rock n Roll events, eight TriRock triathlons, and eight other endurance events. RnR events rely on local volunteers and charity partners, in St. Louis' case, Fleet Feet and Team Activities for Special Kids, to do the heavy lifting. RnR swoops into town just before the race and packs up within 24 hours of the race’s end, taking the profits with it. Charity partners, such as TASK, keep money that they raise but do not share in RnR’s profits.

Competitor Group comes to town for the benefit of the Competitor Group. The locals are non-profits, benefiting local charities and putting the money back into the races and community.

Call me a yokel. Call me provincial. Call me a homer. I prefer the locals. And, I get the sense that there might be a large enough group of loyal local runners more interested in homegrown races than in one staged by a company that blows into town for a weekend, then takes the money and runs.

I have no problem with the bevy of local races gobbling up runners that might otherwise run Rock 'n' Roll, but I'd hate to see them cannibalize each other.