An overdue ode to Big Jens 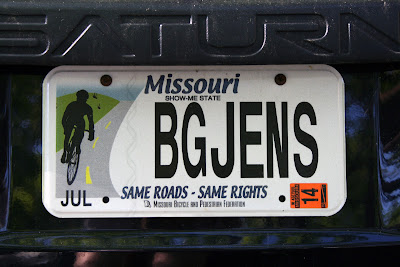 Vanity plates are for vain people.

So imagine my horror a couple months ago, when my husband revealed the license above as a surprise to me. Not only did the plates make the two of us look vain, they made Big Jens Voigt look vain as well. Guilt by association.

In Voigt's case, nothing is further from the truth. Big Jens rides ugly. He wasn't afraid to ride a little girls bike when his own was demolished and a team car was nowhere in sight a couple years ago at the Tour de France. His personal mantra: Shut up, legs.

Three events of this week forced me to reconsider my stance on the Vanity Plates:


Big Jens on the attack.

The first occurred at the press conference before the start of the Tour of California. Race favourite Tejay Van Garderen, a young pup of 24, was asked whether cycling could ever put doping scandals in its rear view:

"I hope fans can move past what's happened in that whole era. I think the sport of cycling has taken its hits, but hopefully people don't lose faith in us now," Van Garderen told reporters. "I hope what people will see is a million fans out on Mount Diablo, see that the sport of cycling is still strong.

Voigt was at the table of inquisition with Van Garderen. Though they ride for rival teams, he stepped up, as he often does for a teammate, went on the attack and took the bullet:

"Why should he and his generation be punished for things men my age have done? Hopefully we have finally hit bottom, got all the skeletons out. Hopefully we have finished this story, the punishment and the consequences. ... I'm 41 and can still perform, a lot better than before. I hope we keep catching bad ones and there is no way out, no way to escape."

Voigt tried a typically Jens escapade, attacking with about 10 km to go to the finishing line of Stage 4. Momentary panic ensued. Peter Sagan, winner of nine stages in California, knows that when Big Jens attacks, you react. Sagan chased down Voigt himself, ending the threat.

Still, it was good to see Big Jens out in front, stamping the pedals in anger and at war with  his machine, as Paul Sherwen would say, taking his chances. It's his trademark, and he did not disappoint his fans.

Then, he turned around and did the same thing today. Sensing opportunity with the rising crosswind, Voigt charged away from the peloton with more than 50 kilometers left to race. Seventeen smart riders followed his lead, including Sagan and Van Garderen, establishing a large breakaway.

The peloton gave up with about 20K to go, but Jens wasn't finished. He attacked again with a little more than 5K left. This time, no one went with him, and he soloed to victory.

Many have written odes to Jens and his toughness. Here's a sampling:

Scientists used to believe that diamond was the world's hardest substance. Then they met Jens Voigt.

Jens Voigt doesn't read books. He simply attacks until the books relent and they tell him everything he wants to know.

Jens Voigt doesn't complain about what suffering does to him, but suffering constantly complains about getting picked on by Jens Voigt.

My favorite thing about Jens: He can translate any of the above into seven different languages.

But the thing is, neither his quote at the press conferences nor the odes to his toughness nor even "Shut up legs" says it quite so succinctly as six letters. Our homage might not be the funniest, but it's probably the shortest.

I hope he approves. Or, at least, I hope he finds nothing to attack in it.
Posted by Unknown at 2:38 PM