Giro jumps on the bandwagon, announces route change on Twitter

Grumpy, old men - and women - bemoan the intrusion of social media into their lives, its lack of depth, its disposable nature. Tough beans, as my mom would say.

When you want to blast out the news, nothing seems to spread the word faster  among sports fans than Twitter. The organizers of the Giro d'Italia reaffirmed that notion, announcing that two climbs would be removed from Friday's stage because of snow and cold.

Tweeting in English and Italian, the organizers announced:  "For the bad conditions of the weather and to preserve the safety of the riders, this will be the new stage 19 route:" 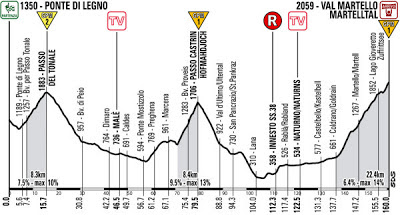 The route eliminates two climbs that many believed could prove decisive, the Gavia and the Stelvio, a pair of peaks in the Dolomites. The stage still includes a pair of Category 1 climbs and covers 160km, about 100 miles. Ice and snow already have piled up on the side of the narrow mountain roads, leaving nowhere for spectators to stand, and snow is in the forecast.

Race director Mauro Vegni told cyclingnews.com: "We've opted for plan B. The weather is getting worse adn we didn't want to push our luck, risk the riders' health and that of the spectators." Vegni added that Saturday's stage might also be revamped.

Not that any of this makes a whole lot of difference at this point. The overall leader, Vincenzo Nibali, extended his margin to more than four minutes over his nearest contender, 2011 Tour de France winner Cadel Evans, by winning the uphill time trial Thursday. Nibali's time of 44 minutes, 29 seconds was 58 seconds faster than second-place Sammy Sanchez, who looked like someone just shot his dog as Nibali neared the finishing line. Evans finished 25th, 2:36 behind Nibali, and is 4:02 behind in the overall standings. Lover of '80s big hair bands Rigoberto Uran Uran trails Evans by just 10 seconds in the overall classification, following his sixth-place finish Thursday.

The tifosi - Italian for "Italian cycling goofballs" - had been clamoring for Nibali to do more than limit his losses. His stage victory was emphatic and should shut them up.

Barring a psychological, physical or mechanical collapse of epic proportions, Nibali should ride into Brescia on Sunday as the holder of the Maglia Rosa, the pink jersey, and hoist the giant golden fusilli given to the overall winner.
Posted by Unknown at 1:53 PM