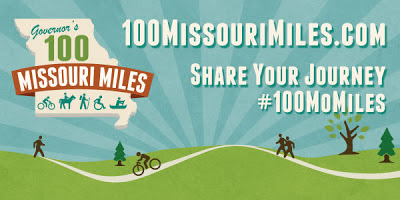 The office of Gov. Jay Nixon and Missouri Tourism have come up with a novel way to capitalize on an honor recently bestowed on the state.
Missouri was named Best Trail State by American Trails, a nonporfit group that promotes hiking, biking and riding trails.

"The state places a high value on trails, recognizing their potential support healthy, thriving communities," the group said, citing the Lewis and Clark and Santa Fe trails, as well as the Trail of Tears and 500 miles of recreation trails. "The states continued commendable dedication to the design, construction and maintenance of trails is what allows Missouri to offer such a wide range of outdoor recreation opportunities," American Trails noted in it announcement in April.

Seizing the moment, Nixon has called for Missourians to get out and enjoy 100 miles of walking, running, hiking, cycling and has named it the Governor's 100 Missouri Miles Challenge.

From now until the end of the year, Jeremiah and his friends at the tourism office and department of health and senior services will promote the state's trails, parks, greenways and blueways as places to get in your mileage. The state park system recently released, "Trails of Missouri State Parks," a good starting point.

You can also get ideas from Trailnet, Fleet Feet, Big River Running, and GO! St. Louis, who have touted it on their web sites and will support the initiative at a press conference at 8:45 a.m. Saturday at Steinberg Rink in Forest Park.

Jeremiah and his wife have put their running totals on the home page for all to see. Let's just say the governor has some catchin' up to do.
Just another way to get out and enjoy.
Posted by Unknown at 12:47 PM