Chris Froome: the favourite still has to make it around France 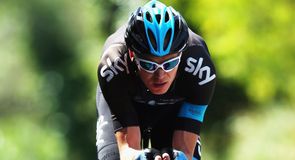 The overwhelming support flowing the way of Sky's Chris Froome takes one back to the days of the dominance of Lance Armstrong. But Froome should thank Sir Bradley Wiggins.

Odds on Froome are better than even money, according to Europe's online betting sites. The reason: he followed the blueprint that led to Lord Wiggins' victory last year. Wiggins won every race he entered in the run-up to his Tour victory: Paris-Nice, the Tour de Romandie and Dauphine. He then used his formidable time trialing skills and  Froome's support to dominate in France, some would say boringly so.

If it worked for one gangly Brit, it will work for another, right?

Froome has won Romandie, the Dauphine and Criterium International, finishing second at Tirenno-Adriatico. He was second to Wiggins in last year's time trials and this year has strong support from Richie Porte, Kanstantsin Siutsou, Peter Kennaugh and Edvald Boasson-Hagen.

But this is a race, and if he's going to win, he'll have to keep safe and healthy for three weeks. And he'll have to beat these guys:

Alberto Contador: Bjarne Riis might have assembled an even strong support team at Saxo-Tinkoff than has Team Sky. The squad includes former World TT champ Michael Rogers, former Tour de Suisse winner Roman Kreuziger, climber Nicholas Roche, and the Spanish loyalists that gathered at Contador's side when he rode for Alexander Vinokourov: Benjamin Noval, Sergio Paulinho and Jesus Hernandez.They are known as The Little Vinos. Contador hasn't shown great form this season and has really struggled in the time trials, which used to be considered a strength. He's also missing the acceleration on a climb and the look of joy on his face as he rode away from his competitors. Maybe it's age, maybe it's adjustments to his "training and nutrition" regimens.

Joaquim Rodriguez: He has a punch of acceleration resembling the Contador of old but has never mastered the time trial. It's how he lost last year's Giro on the final stage.

Andy Schleck: Remember this guy? Had a brother who won on Alpe d'Huez in 2006 with whom he formed a formidable 1-2 punch in softening up Contador a couple years back. Brother Frank got busted for a diuretic -- aka masking agent. And Andy landed hard on his backside and broke his pelvis, forcing him to miss the Tour last year and the remainder of the season. He has been unremarkable and seems to have lost more joie de vivre than Contador.

Ryder Hesjedal: It's hard to root against St. Louis' adopted son, husband of native Ashley Hofer. He's solid on climbs and in the time trial and isn't afraid to launch an attack that starts to stir things up. But bad luck has been his only luck since last May, when he won the Giro. He dropped out of the Tour after a series of crashes, abandoned this year's Giro because of illness and left the Tour de Suisse because of head and neck injuries. His support staff includes a pair of young aggressive climbers, Dan Martin and Andrew Talansky, former top 10ers Christian VandeVelde and Tom Danielson, stage winner David Millar, Giro strongman Ramunas Navardauskas. The group can be team players if Hesjedal recaptures his form but can turn into agitators if he's not.

Alejandro Valverde: Movistar's designated leader, whose best days probably are behind him. The team is stacked similarly to Garmin. With Tour de Suisse winner Rui Costa, Jonathan Castroviejo and climbing revelation Nairo Quintana as support riders, any of them could step into the leadership role or shake things up by attacking other GC contenders.

Cadel Evans: Seems like more than two years since he stood on the top step of the podium. Young teammate Tejay Vangarderen outperformed him last year. On the other hand, Evans entered this year's Giro at the last minute as a training ride and finished third. If he didn't overcook himself in Italy, he could be a threat for the podium.

Tejay Vangarderen: But Evans will have to get past his BMC teammate first. Vangarderen finished fifth this year and won the Tour of California in May. They begin the Tour as co-leaders. The strategy seldom works well. Contador had to deal with lots of guff from teammate Lance Armstrong before winning in 2009, when team leader Johan Bruyneel let the road decide. But, then again, even if you pick one of them, things can go horribly wrong, as it did for Greg Lemond and Bernard Hinault in the '80s. In either case, the situation is liable to devolve on a person level, if not on the road.


Jacob Fuglsang: A surprise leader of Astana, where Jani Brajkovic appeared to be the boss. The team might be thrown into turmoil. But then, neither would have been considered a serious podium threat.

Pierre Rolland: When you're a teammate of Thomas Voeckler, you have to watch your back. He can't help himself. Voeckler will attack, even if the team's role is to support Rolland, a climber who won on Alpe d'Huez in 2011 and has improved his time trialing.

Jurgen Van Den Broeck: He's finished just shy of the podium a couple of times and is in his prime, but the Lotto-Belisol team is built around sprinter Andre Greipel. Van Den Broeck will have little support in the mountains.

Thibaut Pinot: He's young. He's French. He rides with panache in the mountains.The commentators will speak often of him for those reasons. His time will come later.