Nothing like an oversized Alpe d'Huez graphic to grab your attention 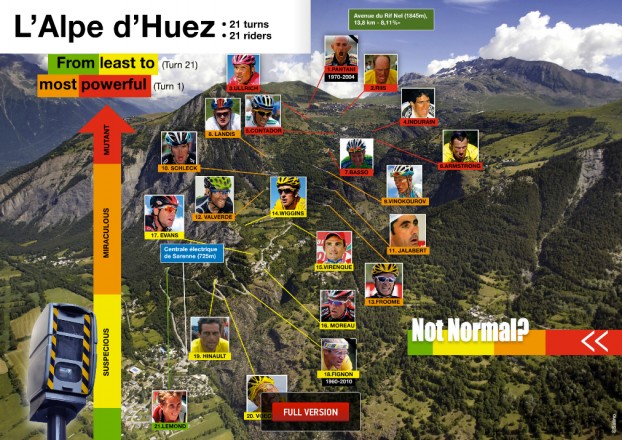 Wanted to make sure that you didn't miss a chance to read the excellent work of editor Antoine Vayer, Frederic Portoleau, Stephane Huby and Jean-Pierre de Mondenard in "Not Normal? An insight into doping and the 21 biggest riders from LeMond to Armstrong to Evans." The publication casts a long, dark shadow on the performances of almost every Tour de France winner over the past three decades.

You can order the full version for $9.95 or squint at the miniversion.

The publication's centerpiece is a graphic that uses a photo of Alpe d'Huez as a backdrop; the route features 21 turns, with a rider pictured at each corner. Riders pictures are plastered at various heights, based on the suspiciousness of their performances. The rides are divided into four classifications: Unremarkable, Suspicious, Miraculous and Mutant.

Only Greg LeMond falls into the unremarkable category. Among the occasionally suspicious: Thomas Voeckler, Bernard Hinault, Cadel Evans and Sir Wiggins, though they turned in many unremarkable performances as well. The miraculous include Chris Froome, Andy Schleck and Laurant Jalabert. The mutants include Alberto Contador, Lance Armstrong, Marco Pantani, Jan Ullrich, Miguel Indurain and Bjarne Riis.

Note, though, that Indurain ranks above Armstrong  among the mutants. Armstrong is a lowly sixth; so, again, there could be an element of truth to his assertion that he wasn't alone.

Froome's most recent performance, winning on top of Ventoux, brought up the speculation again. Grabbing for oxygen after the stage, his victory over Nairo Quintana seemed anything but easy. But he answered the doping questions again on the second rest day of the Tour:


"I can understand why people are asking, given the history of the sport and that they've been let down. I've also believed in people who turned out to be cheats and liars, but I can assure you I'm not. Yesterday was a dream come true for me, winning a stage like that on top of Ventoux."

The authors base their rankings on an analysis of watts per kilogram on some of the toughest climbs in the Tour. A couple of caveats: some of the riders competed in the days before power meters and wattage measurements, so the authors extrapolated from the statistics of riders of later eras, based on weight, speed, difficulty of the climb. So, some variation from their results is a given. Which opens the topic up for debate. Still, most of the vanguard for cleaning up cycling, Jonathan Vaughters, David Millar, etc., hailed the report as the best statistical analysis of its kind. Vaughters augmented with a chart showing the average speed up Alpe d'Huez since 1982: 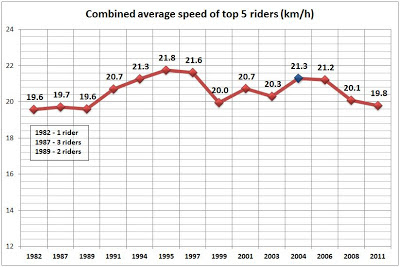 Velonews reached out to the riders and teams mentioned in the report. Few, had direct comments. Sky issued a statement for Froome and Lord Wiggins, saying,


"We know exactly how our riders prepare and perform and the true science behind this. And we have our own accurate data that we can rely on to support this."


Voeckler offered the most impassioned and lengthy response.


"My goal is not to try to convince all the people who are asking questions about me or my integrity. My goal is and always has been to achieve the best possible results according to my ethical beliefs, (which) do not tolerate doping, and if this state of mind has allowed me sometimes to beat cheaters, many times it is the latter which deprive honest (riders) victories, or at least distort the race."