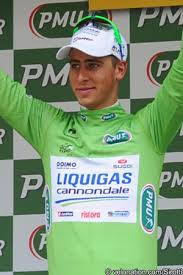 I don't often make the kind of absolute statements that my fellow sport writers are prone to pronouncing, but in this case, I'll make an exception.

Peter Sagan has just about sewn up the green jersey, thanks to well-timed and well-executed tactics of his teammates at Cannondale.

By winning the intermediate and final sprints, Sagan has built a 94-point lead in the green jersey competition. This means that Sagan will be a regular visitor to the podium and will collect enough of those green PMU cycling action figures, awarded to the daily green jersey wearer, that he could stage a re-creation of the Battle of the Bulge on the team bus with the trophies as army men.

Cannondale used a second-category climb near the middle of the stage to its advantage. The team rode at the front of the peloton and picked up the pace, which shed the bulk of the sprinters from the main field. Sagan is one of a handful of gifted sprinters who can maintain the pace on such a climb. His main rivals --  Mark Cavendish, Andre Greipel and Marcel Kittel -- were left behind.

The trailing group lost 2 1/2 minutes on the climb, after which Cannondale continued to drill to the sprint point, where Sagan won uncontested. That was another 20 points in the bank. With about 40K remaining, the sprinters lost impetus and eventually nearly 15 minutes. Only a few sprinters remained in the lead group, but Argos' John Degankolb nearly spoiled Cannondale's party. Sagan found just enough speed to take the win.

Sagan's lead is nearly insurmountable. He'll have to remain vigilant on intermediate sprints but won't have to attack. With the mountains on the horizon, Cannondale can rest up for a few days before defending the jersey in Brittany.

Orica Greenedge also continued its classy riding, and we don't want any more time to pass before giving these guys credit for esprit d'corps in passing the yellow jersey from Simon Gerrans to Darryl Impey.  Phil and Paul regaled the viewing audience with a South African song called Impi, about a group of warriors, that the team plays on the bus to get itself revved up before a stage.

What a bunch of happy rough housers.

NBCSN caught up with Orica owner Jerry Ryan, who is living the dream and was especially proud of Gerrans passing the jersey to Impey, who led out Gerrans on his Stage 3 victory.

"That's what matemanship is all about," Ryan said.

Keeping things interesting early on Friday's stage was Big Jens Voigt, who was part of the breakaway and hammered away until he lost all his mates but was caught by Cannondale's tempo after the Category 2 climb. It prompted his fans to come up with more superlatives. This one is courtesy of Mike Meehall Wood via twitter:

Thoughts of retirement leads to a wistful adieu to Christian VandeVelde of Garmin-Sharp. The winner of the 2008 Tour of Missouri, VandeVelde hit the floor hard Wednesday, sustaining a blood clot in a muscle and jarring a plate in his collarbone from a previous surgery. He carried on  Thursday but was involved in another crash early Friday and abandoned.

VandeVelde has endured a star-crossed career. He showed immense talent but was part of the doping culture that ran rampant at US Postal. He joined Garmin in 2007 to be part of the change in culture and enjoyed his best results with the team, finishing fourth in France in 2008 before winning here.

With Levi Leipheimer, George Hincapie, Tom Danielson, Dave Zabriskie and others, VandeVelde fessed up to USADA and received a six-month suspension. This Tour was supposed to be his last. He gave a dignified interview at the end of Stage 7, reflecting on what he has learned from riding the Tour:


"A lot of life lessons. The Tour de France is amazing. I learned to have a lot of respect for a lot of different things ... The biggest thing is the friendships and camaraderie and going into battle with your teammates day in and day out."