A brief look at the elite field in the GO! St. Louis half-marathon

The organizers of GO! St. Louis have again invited an elite field for the half-marathon, scheduled for Sunday as part of the family fitness weekend. Sunday's races also include an open half-marathon, marathon and marathon relay, which begin and end in downtown St. Louis.

Given the personal bests of the runners, the course records of 1:03:13 and 1:12:22, set last year by Aaron Braun and Mattie Suver, respectively, could be in danger, especially if the ideal weather forecast comes to fruition. Here are capsules of the top runners:

MEN'S FIELD
Bib No. 1 - Jordan Chipangama (chip-un-GAH-muh): A native of Zambia, he represents Northern Arizona Elite. He has a personal best of 2:13 in the marathon and finished second in last year’s elite half in 1:03.22.

No. 2- Craig Curley: A resident of Tucson and a member of the Red House People Clan of the Navajo Nation. He has a personal best of 1:04.14 in the half-marathon and finished eighth here last year.

No. 5- Matt O'Connor: A native of St. Louis, he is a veteran of area races, including the GO! St. Louis Halloween 10K, where he has finished in the top 10.

No. 10- Stephen Pifer : A state track and cross country champion at Edwardsville High, he went on to become an All-American at Colorado, and recently finished in the Top 10 at the U.S. 15K championships.

No. 11 Carlos Tujillo: A former member of the University of Oregon team, he has a personal best of 1:03:19 and represented the U.S. in the 2013 IAAF World Marathon Championships.

No. F1- Sarah Kiptoo: A native of Kenya, she trains in Santa Fe and finished third in last year’s GO! Half-marathon. Her personal best is 1:11:21.

No. F3- Kellyn Johnson: A member of Northern Arizona Elite, she finished fourth at the US Ten-mile championships, fifth in the U.S. Cross Country Club Championships and has a personal best of 1:12:27 in the half-marathon.

No. F4- Hannah Wanjiru: A native of Kenya, she finished 13th at the 2010 World Cross Country Championships and has a personal best of 1:12:52 in the half-marathon.

No. F5- Pasca Cheruiyot: A native of Kenya who ran at Missouri State and Florida State, she has a personal best in the marathon of 2:35.

No. F8- Dana Kelly Herrick: A native of Iowa who represents Power Bar Elite, she qualified for and finished the 2012 Olympic Marathon Trials.

Follow @kathylean
Two great reasons to get up early Saturday.

1. Sven Kramer and his Dutch counterparts swept the medals in the men's 5,000-meter event at the speedskating oval. The Netherlands' dominance isn't a surprise; it's expected. Kramer's victory was assumed; he has won every world cup event at the distance in the past two seasons and was the defending gold medalist.

But Kramer carries the weight of a nation. The Dutch are nutty about speed skating; they erupt in squeals for each lap of the 13-lap event when lap times are posted. They're hard-core, no one moreso than the King of the Netherlands, who showed up for Kramer's race with the Queen Consort in two.

Talk about Weight of a Nation. Kramer carried it well. No one could touch his winning time of 6 minutes, 10.76 seconds. Jan Blokhuijsen was almost five seconds slower. Kramer took the first of what is expected to be two golds. The second proved his stumbling block four years ago in Vancouver, literally, when he was disqualified in the event for hitting a lane cone. Kramer threw a large hissy on the ice, for which Dutch sport writers can't seem to forgive him. 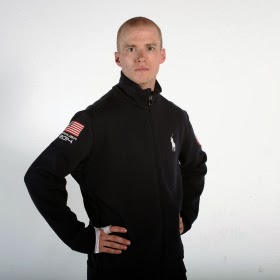 2. SLUH grad Patrick Meek finished 20th in 6:32.94. He won't be happy. The guy swears he has no talent but works harder than anyone else. He's worked 10 years, put his life on hold for a decade, for this one moment.

As former Blues coach Brian Sutter said, though, hard work is a skill. Too few of us master it. In an interview with KSDK, Meek gave kudos to SLUH for work ethic and setting the bar high.

Here's hoping any disappointment will be temporary. Soak it in, man. You are forever an Olympian.

And old-school guys like Pat Meek.
Posted by Unknown at 9:39 AM No comments:

Email ThisBlogThis!Share to TwitterShare to FacebookShare to Pinterest
Labels: Olympics

Plummer, a graduate of Chaminade, came up short for the second time in his attempt to qualify for the Olympics. Plummer is a sprinter on the long track and finished sixth in the 500 meters, one place shy of qualifying. Amy Donaldson of the Deseret News in Salt Lake City profiled the end of Plummer's career in a poignant story that's a must read for anyone who knew him. Or didn't. The media focuses at this time in the Olympic cycle on the few who advance their dreams. Far more competitors decide after an Olympic Trial to say goodbye to their childhood dreams.

Here's the short version of Matt's story: He began his skating career here, training in short track with the coaches who have launched the careers of more than a dozen Olympians. After graduating from Chaminade in 2006, Plummer moved to Salt Lake City to follow his dreams. He made the junior team in short order and seemed on target to make an Olympic team. But he just missed in 2010, skating the best of his life, and again this year. The difference this time around is that he thought he could have skated better.

By the time the next Olympics rolls around, Plummer will be 30, past the prime of  skaters.

He provided one terrific moment, which captures his joy, passion and love of skating in a personal way. Back in 2009, Plummer set the world record for skating 500 meters backwards. We thought it was the perfect time to share the link, as a fitting look back and salute to Plummer for following his dream.